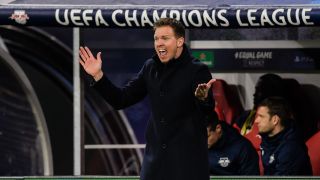 RB Leipzig takes on Atletico Madrid this Thursday in Lisbon in a UEFA Champions League quarterfinal.

Following positive COVID-19 tests of two unidentified individuals from Atletico last weekend, there is some question whether the game will be postponed.

With further stringent tests planned throughout the week, hopefully with the self-isolation of those individuals and no additional cases the game can go ahead. Let’s hope it does if it is safe to do so, and where can you watch the game? Please read on.

How to watch Leipzig-Atletico from anywhere

Thursday's game is available on CBS All Access in the United States, which is easy enough to come by. It runs $5.99 a month and has a free trial, so you effectively can catch this game for free, if you want.

The journey so far

RB Leipzig topped their group beating Lyon to top spot. In the second round, they were excellent over two legs beating Tottenham Hotspur 4-0 on aggregate.

Atletico Madrid finished behind Juventus in their group, and when they were pitted against Liverpool, many did not predict what happened. After a 1-0 win at home in Madrid, Atletico travelled to Liverpool and shocked most experts and football fans alike, by winning at Anfield after extra-time 3-2 and going through on aggregate 4-2. The holders were out, and a fantastic result for Atletico Madrid.

RB Leipzig will be unable to turn to Timo Werner, the outstanding German striker who has now joined Chelsea, and they will likely go with Yussef Poulsen and/or Patrik Schick in the attack. Austrian midfielder, Marcel Sabitzer is an injury doubt for this game, and if he misses out, that will be a blow to Leipzig. The German League finished the end of June so Leipzig will not have played a competitive game for five weeks, which for a game the size of this is a long wait. It will be interesting to see how rusty they are.

Atletico Madrid has only injury concern with the defender, Sime Vrsajako a doubt. Still, they do have cover if Vrsajako does not regain fitness in time in Santiago Arias or Kieran Trippier.  Atletico does have plenty of options in attack in Marcos Llorente, Diego Costa and Alvaro Morata with Koke and Thomas Partey pulling strings in midfield. It promises to be a fascinating football game to watch.

Paris Saint-Germain won the first quarterfinal on Wednesday, shocking Atalanta 2-1 on a pair of late goals.

How to watch Leipzig vs. Atletico in the United States

The game is on 3 p.m. Eastern time, on the following channels: