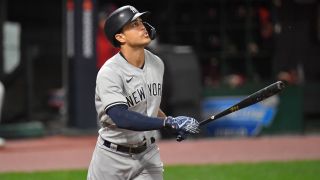 Baseball fans from The Bay to the Big Apple are excited to learn how to watch Tampa Bay Rays vs. New York Yankees live stream in the American League Division Series (ALDS) this week. The best team in the American League is set to play a five game series against one of their AL East division foes. Throw out the regular season record when you get to the MLB Postseason. The series is now tied at two games a piece, so it all comes down to this evening.

Here is how you can watch tonight's Game 5 of this AL Division Series online featuring the Tampa Bay Rays vs. New York Yankees.

How to watch Tampa Bay Rays vs. New York Yankees live stream in the U.S.

The Tampa Bay Rays vs. New York Yankees ALDS started on Monday, October 5 from Petco Park in San Diego. All MLB Postseason series from this round on will take place at preselected locations instead of home stadiums. All five games of the series will air on TBS.

You can access TBS online on five of the largest live TV streaming services.

Sling TV has TBS streaming online as part of either the Orange Plan or Blue Plan for only $20 for your first month. You can upgrade to the combined Orange + Blue Plan to get most MLB Playoffs games among the live streaming services. (See all Sling TV channels.)

YouTube TV is a highly recommended option for fans who want to see every game, and it includes TBS for Tampa Bay Rays vs. New York Yankees. For $65, the service includes the channels you need for all the national MLB Playoffs games. (See all YouTube TV channels.)

Fubo TV no longer includes TBS, so fans looking for the Tampa Bay Rays vs. New York Yankees series should look at other options. (See all Fubo TV channels.)

The Tampa Bay Rays (40-20) carried their winning ways into the WIld Card round by sweeping the Toronto Blue Jays last week. Rays’ pitching only allowed three runs in the series, and they’ve had five days off to reset. Starting pitchers Blake Snell (4-2) and Tyler Glasnow (5-1) are set to go again in games one and two of this Division Series. The Rays were 8-2 against the Yankees in the regular season in 2020, so expect them to come into Petco Park confident.

The New York Yankees (32-28) made the most of their Wild Card spot by slugging their way past the Cleveland Indians in two games. Giancarlo Stanton had a home run in each game, and Gary Sanchez had three key runs batted in as part of the crazy game two. Even though game two was intense and crazy long, the Yankees have had the same days of rest as the Rays. With starting pitcher Gerrit Cole ready to go in game one, give these Bronx Bombers more than just a slugger’s chance.

How to watch Tampa Bay Rays vs. New York Yankees live stream in the United Kingdom

If you're in the United Kingdom, you can still see lots of postseason baseball action. The Tampa Bay Rays vs. New York Yankees live stream ALDS will be on BT Sport ESPN channel starting Monday.

The Tampa Bay Rays vs. New York Yankees on BT Sport Pass will stream in the BT Sport Box Office app, available for iOS and Android, or on the BT Sport website. The apps can also be used with Google Chromecast or Apple Airplay to watch on your big screen. Check the BT Sport schedule each day, as games will be on BT Sport 1, BT Sport 2, BT Sport 3 and BT Sport ESPN.