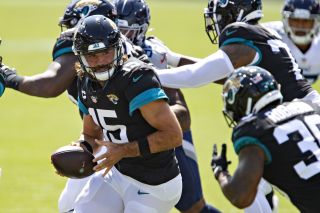 If you want to find out how to watch the Miami Dolphins vs. Jacksonville Jaguars live stream online, you’ve come to the right place. Two of the younger teams in the National Football League meet in primetime after outperforming expectations during the early stretch of the year. Maybe this isn’t the star-studded matchup that football fans would hope for, but there are underrated storylines to consider heading into the action.

First, let’s make sure you know how to view Thursday Night Football!

How to watch the Miami Dolphins vs. Jacksonville Jaguars live stream online:

Keeping consistent with the previous broadcast, Week Three of Thursday Night Football will remain broadcasted solely by NFL Network. That will be the case in Week Four as well before a wider pool of options, including Amazon Prime and Fox, become available in Week Five.

One great way to gain access to NFL Network is by signing up for Sling TV. Specifically, the Sling Blue deal offers NFL Network in addition to dozens of other channels for just $29.99 per month. However, the pool of options is limited and won’t include other key sports channels like ESPN, which is exclusive to Sling Orange. In order to create a full NFL experience, you may want to consider Sling Orange Plus Blue for $44.99 per month. (See all Sling TV channels.)

Another option is Fubo TV, which offers a wide range of channels including NFL Network in most of its packages. Their plans begin at $59.99 per month with a wide variety of options that help users cater to their television-viewing interests. (See all Fubo TV channels.)

You can also catch this week’s Thursday Night Football game using YouTube TV. For only $64.99 per month, users gain access to NFL Network in addition to a great range of local and national channels. One of the perks of YouTube TV is that a membership works with up to six accounts, so your streaming plan can accommodate your household. (See all YouTube TV channels.)

When does the Dolphins vs. Jaguars game start?

This is one of the few NFL arenas currently allowing fans into games in a limited capacity. So instead of hearing fake crowd noise and reactions, a limited pool of Jaguars fans will need to make their presence heard.

It’ll be a partly-cloudy evening in Northeast Florida with temperatures expected to be in the mid-80s. The chance of precipitation is low and each of these Florida-based teams should be prepared for some humidity. Besides that, the weather shouldn’t play too much of a factor in this matchup.

What to watch for in the Miami Dolphins vs. Jacksonville Jaguars TNF matchup:

If you thought Minshew Mania would blow over in year two, you’re sorely mistaken. Jaguars quarterback Gardner Minshew has been a revelation through two games with a 75.4 percent completion percentage for 512 passing yards and six touchdowns to only two interceptions. These aren’t ‘swiss cheese’ defenses Minshew has faced either — Indianapolis and Tennessee are worthy foes for the sophomore gunslinger.

Many believed the Jaguars were in line for a complete tank job, opening the season with the greatest odds for the No. 1 draft pick. So far, they’ve shown a lot more fight than given credit for led by an unlikely hero in 2019’s 178th overall pick. Six receivers had at least 35 yards in their previous contest against Tennessee. Those receivers were led by D.J. Chark (84 yards), who’s questionable for TNF.

Keep an eye out for rookie running back James Robinson, who leads the Jaguars in rushing after going undrafted before the season. As one of the game’s most interesting breakout candidates through the early going, Robinson is having an unprecedented start for an undrafted first-year player.

Meanwhile, the Miami Dolphins held up decently against two extremely difficult opponents in the New England Patriots and Buffalo Bills to begin their year. Their battle with the Bills came down to the very end as Miami outscored Buffalo 18-14 in the second half.

Much of the Dolphins’ success can be credited to tight end Mike Gesicki, who led his team with 130 receiving yards and a touchdown in the contest. Through two games, Gesicki is Pro Football Focus’ No. 1 ranked tight end as one of the more effective dual-threat players at his position. Miami fans should be enticed by his prospects going against a Jaguars defense that allowed 84 yards and two touchdowns through the air to Titans TE Jonnu Smith.

Maybe it’s not the most exciting matchup in terms of possible playoff implications, but there’s a great chance for this game to become a shootout.